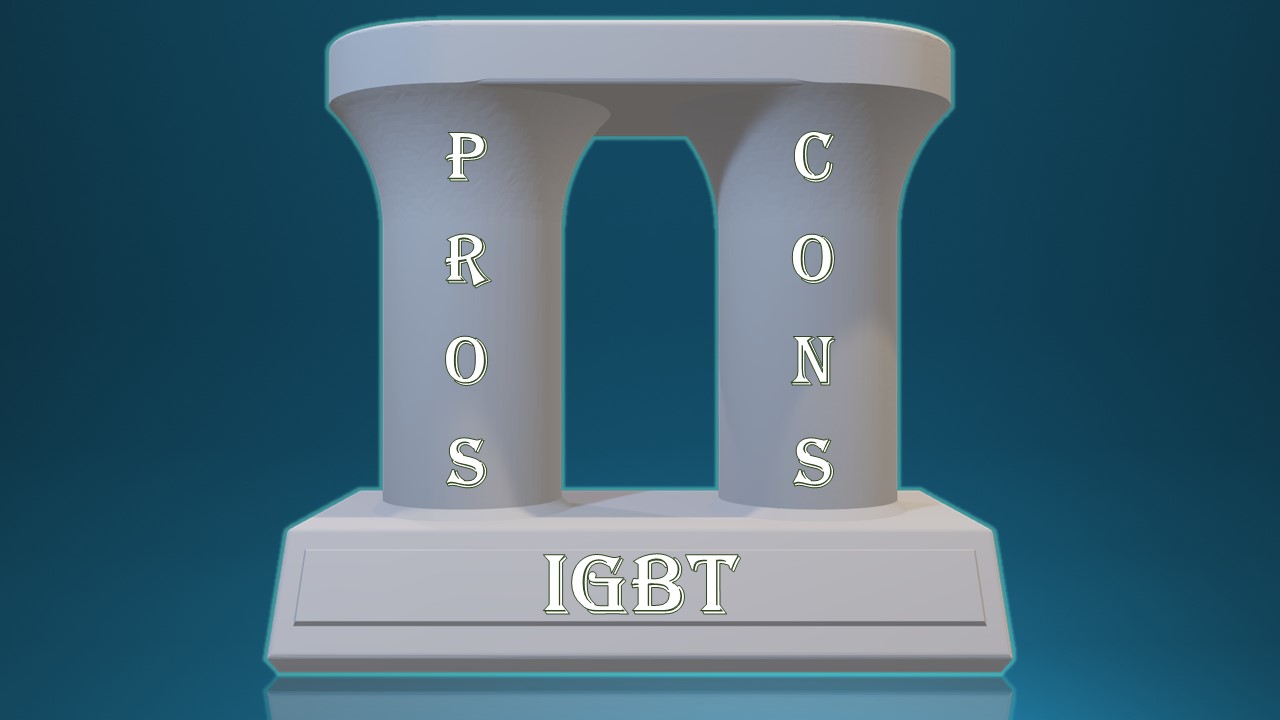 Pros and Cons of IGBTs

Let’s take a look at the benefits of using IGBTs.

1. The circuit of the device consumes practically no power when the IGBT is operating in static mode, both in a conductive and non-conductive state. When switching the IGBT, the peak currents in its control circuit are no more than the actual currents used to control the thyristor, and the integral of the gate current required for safe switching of the IGBT is significantly less than the charge required for safe switching of the thyristor.

Of course, the current and charge in the IGBT control circuit grow with an increase in the nominal collector current (the number of crystals in the device), but this is not the case for a thyristor, however, the ratio of currents and charges in the control circuit described above is true up to the maximum average currents of power devices of today, i.e., at least up to 3000-4000 A. The comparison was carried out with a conventional single-phase thyristor since it is the best power semiconductor in terms of consumption in the control circuit.

2. Relatively low values of the residual collector-emitter voltage drop when operating in a conductive state. Similar to a bipolar transistor, this characteristic is called the collector-emitter saturation voltage.

3. Relatively low energy loss during switching on and off, comparable to those for bipolar transistors or GTOs if we speak of a higher voltage range of power semiconductors.

4. High resistance to secondary breakdown. Even high-voltage devices, as a rule, have a safe operating area close to rectangular and allow operation with exceptionally high rates of current and voltage rise in the power circuit. A short-term dynamic avalanche breakdown mode is permissible, for example, on the trajectory of a shutdown. However, all this is for the level of operating currents less than 100 A/cm2. As a rule, the value is something close to 30-50 A/cm2.

5. The possibility of limiting and disconnecting the short-circuit current. If a short circuit occurs in the IGBT load at a certain maximum current several times higher than the nominal one (usually 2-3 times at a typical gate voltage of +15 V), it switches to a flat section of the current-voltage characteristic, i.e., into current limiting mode.

In this case, the full voltage of the source in the collector-emitter circuit is applied to the device. In such an emergency mode, the device can function for some time. Usually, the power semiconductors manufacturers guarantee 10 microseconds of safe operation. Thus, the use of IGBT makes it possible to radically change the technology and ideology of protecting equipment from short-circuit currents.

The disadvantages and main problems of IGBTs complement its advantages. From a device close to ideal for applications in power electronics, the end-users always want to get a little more so that it becomes perfect. But the ideal is unattainable.

Let’s take a look at the drawbacks of using IGBTs.

1. The on-state voltage of an IGBT is, as a rule, noticeably higher than that of a p-i-n diode or a thyristor switch with similar structure thickness and emitter layers. For IGBT with a standard cell, the reason is fundamental. The fact is that the collector p-n junction of the n-p-n component transistor does not saturate due to effective shunting. At the same time, even if the device conducts a large operating current density, the concentration of excess holes in the high-resistance n-layer near this junction is small, and, accordingly, the electron concentration is close to equilibrium. Thus, in a standard IGBT cell, even when conducting high currents near the emitter surface, there is always a lightly doped layer with excess carriers.

Even though this layer is thin, it makes a noticeable contribution to the voltage drop, and this negative contribution increases for high-voltage types of power semiconductor devices. Therefore, one of the main ways of modernization of the IGBT cell is the search for constructive and technological ways to increase the concentration of excess charge carriers near the emitter surface of the semiconductor structure.

3. Electromagnetic compatibility problems are added to the conventional problems described above. The duration of transients during switching of the device is very small, the voltage and current fronts are sharp, which can lead to undesirable phenomena of generation of high-frequency oscillations, as well as to short overvoltage pulses of considerable amplitude. The most effective way to solve these problems is to optimize the semiconductor layers and the lifetime of charge carriers in the cross-section of the device.

4. The new ideology of protection against short-circuit currents creates new problems. Firstly, the end users want the maximum fault current through the device to be not very high compared to the nominal operating current of the device. The standard requirement is that the fault current should exceed the rated current by 2-3 times. Such requirements to a certain extent contradict the requirement to minimize the voltage drop in the on-state. To ensure them, it is necessary to limit the channel width of the MOSFET cell.

Secondly, the rectangular area of safe operation in case of a short circuit in the load, as well as the smooth activation necessary to protect the complete diode, is much more difficult, and sometimes impossible, for high-voltage IGBTs than for devices with a voltage of 600-1700 V, where all this works perfectly.

Usually, the work done to improve the IGBTs is initially aimed at solving problems 1 and 2. Problems 3 and 4 appear when the device is upgraded and are eliminated by the developers. The further fate of the upgraded device usually depends on the success of these additional works.