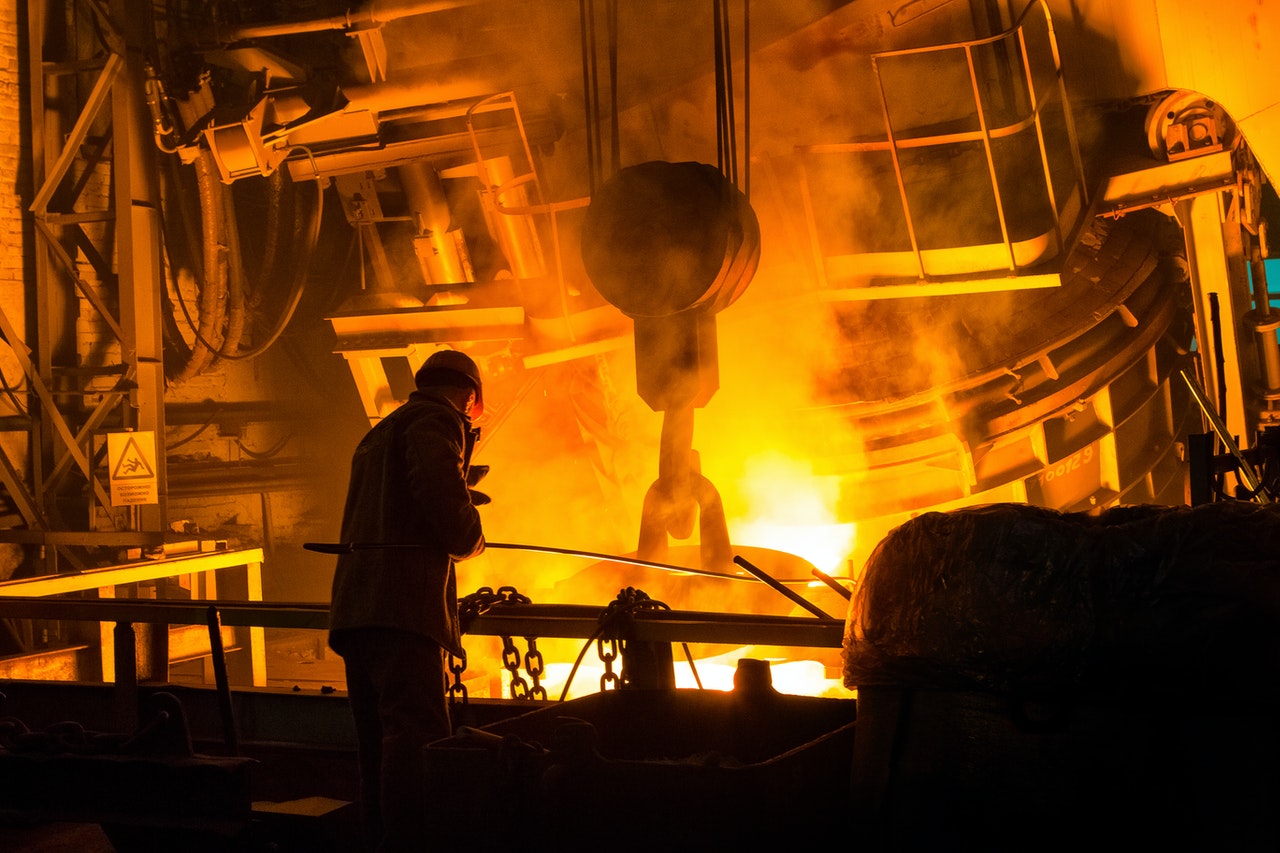 Besides Electric Motor Drives and Vehicles applications of power semiconductors I described in the first article of Applications of Power Semiconductors series, there are plenty more industries like Induction Heating and Melting that benefit from using these power devices. Today I want you to take a closer look at induction furnaces and induction heating industry in general.

Induction heating is based on three basic effects: electromagnetic induction, skin effect and heat transfer. Electromagnetic induction was first discovered by Michael Faraday in 1831. An electrically conducting object (usually a metal) can be heated when placed in an inductor that is part of a resonant circuit. An alternating current flowing through the inductor’s coil generates an oscillating magnetic field. This in turn induces Eddy currents (also called Foucault currents) in the object which, by means of resistive (Joule) heating, heats up the object. According to Lentz’s law the direction of the inductive current is opposite that current that generated the magnetic field which induced the inductive current.

In addition to this, the high frequency used in induction heating applications gives rise to a phenomenon called skin effect. This skin effect forces the alternating current to flow in a thin layer close to the surface of the object. The effective resistance of the object is increased which greatly increases the heating effect. As the skin effect is frequency dependent, the frequency can be used to specify the heating depth. Although the heating due to Eddy currents is desirable in this application, it is interesting to note that transformer manufacturers need to avoid this phenomenon in their transformers. Laminated transformer cores, powdered iron cores and ferrites are all used to prevent Eddy currents from flowing inside transformer cores.

The effects described above render induction heating many advantages compared to other heating methods. Induction heating is cost effective due to the lower energy consumption. Heat is generated directly in the heated object without any interfaces. Heating is contactless and therefore very clean. Induction heating is a fast process offering improved productivity with higher volumes. The heating energy can be easily and precisely regulated and the whole object or just parts of it can be heated by frequency adjustments.

For many processes melting is the first step in producing a useful product; induction melting is fast and efficient. By changing the geometry of the induction coil, induction melting furnaces can hold charges that range in size from the volume of a coffee mug to hundreds of tons of molten metal.

A major advantage that is inherent with induction melting is inductive stirring. In an induction furnace, the metal charge material is melted or heated by current generated by an electromagnetic field. When the metal becomes molten, this field also causes the bath to move. This is called inductive stirring. This constant motion naturally mixes the bath producing a more homogeneous mix and assists with alloying. The amount of stirring is determined by the size of the furnace, the power put into the metal, the frequency of the electromagnetic field and the type/amount of metal in the furnace. The amount of inductive stirring in any given furnace can be manipulated for special applications if required.

Unlike some combustion methods, induction heating is precisely controllable regardless of batch size. Varying the current, voltage, and frequency through an induction coil results in fine-tuned engineered heating, perfect for precise applications like case hardening, hardening and tempering, annealing and other forms of heat treating. A high level of precision is essential for critical applications like automotive, aerospace, fiber-optics, ammunition bonding, wire hardening and tempering of spring wire. Induction heating is well suited for specialty metal applications involving titanium, precious metals, and advanced composites. The precise heating control available with induction is unmatched. Further, using the same heating fundamentals as vacuum crucible heating applications, induction heating can be carried under atmosphere for continuous applications. For example bright annealing of stainless steel tube and pipe.

When induction is delivered using High Frequency (HF) current, even welding is possible. In this application the very shallow electrical reference depths that can be achieved with HF current. In this case a strip of metal is formed continuously, and then passes through a set of precisely engineered rolls, whose sole purpose is to force the formed strip edges together and create the weld. Just before the formed strip reaches the set of rolls, it passes through an induction coil. In this case current flows down along the geometric “vee” created by the strip edges instead of just around the outside of the formed channel. As current flows along the strip edges, they will heat up to a suitable welding temperature (below the melting temperature of the material). When the edges are pressed together, all debris, oxides, and other impurities are forced out to result in a solid state forge weld.

There are two main varieties of induction heating furnaces: coreless and channel.

Induction heating is one of the key metal industry applications using high-power resonant converters. Power range of such converters goes up to 10 MW and there is no more efficient alternative as switching device than the bipolar fast thyristor.

It has been proven for years that the heavy metal industry relies on the reliability and performance of fast thyristors. And as in many other market segments also in the heavy metal industry there is a general trend towards increased power and power density, higher efficiency and productivity. Fast thyristors are one of the key enablers to follow these trends. The most powerful applications are melting and pouring in the heavy metal industry with furnace capacities of up to 50 tons and inverter powers of up to 50 MW. Some applications in the medium power range are surface hardening or quenching for the production of cogwheels, arbors, valves, rails, etc. Further examples are preheating for material forming or before welding, induction welding, stress revealing after welding, steel tempering or annealing. Also induction bending (800 kW level) to shape big tubes for power plants or “I-shape“ steal support forming are frequent applications.

Besides bipolar fast thyristors, fast IGBT modules and SiC devices are being used nowadays. They are widely produced by most power semiconductors companies I described in Major Manufacturers of Power Semiconductors article.

SiC devices operate at high frequencies (five to eight times higher than conventional silicon), with high efficiency and high voltages not achievable by Si IGBTs. Also, the WBG energy and low intrinsic carrier concentration in SiC enables it to keep semiconductor behavior at much higher temperatures (up to 600 degrees C) than Si and hence can operate at higher junction temperature than IGBTs. SiC reduces waste heat which leads to less cost and weight in the water cooling system. SiC also has typical die sizes almost 20X smaller than similarly rates Si to fit better into the induction heating workhead.

The ability to embed high temperature semiconductor electronics, that are not cooled, directly into hot environments enable key benefits for induction heating applications. High-temperature capability (unpackaged SiC MOSFET dies can operate at a junction temperature at 400 C and a SiC module with packaging has an approximate device junction temperature of up to 175C) eliminates performance, reliability, and weight penalties in lieu of liquid cooling, fans, thermal shielding, and longer wire runs needed to attain similar functionality in applications using conventional Silicon semiconductors.

High voltage operation in SiC power devices is possible because of much thinner blocking regions that enable fast switching. This allows SiC-based power converters to operate at higher switching frequencies at a greater efficiency (so, less switching energy loss). Higher switching frequency in induction heating is imperative since it allows use of smaller capacitors, inductors, and transformers, which in turn allows for a smaller tank circuit and can greatly reduce overall power converter size, weight, and cost. Si devices cannot match these switching speeds.

Induction heating furnaces offer a clean, energy-efficient, and controllable melting process and are widely employed in steel, copper, and aluminum production. Induction furnaces use convection current to achieve the melting point of these metals, thereby using less energy than other furnaces which usually fire up at higher temperature levels than those required to melt the metals.

There are many big players in induction heating. Here are some of the leading companies working in this field:

The growing railroad industry along with a higher requirement for mining, smelting, and metal alloy machinery are factors contributing to the growth of the induction furnace market. Steel and copper production is shifting from traditional bases in North America and Europe to the fast-developing economies in Asia. The setting up of new plants is also driving market growth considerably.

To learn more about power semiconductors and power electronics visit Marketing in Power Electronics section of my website.