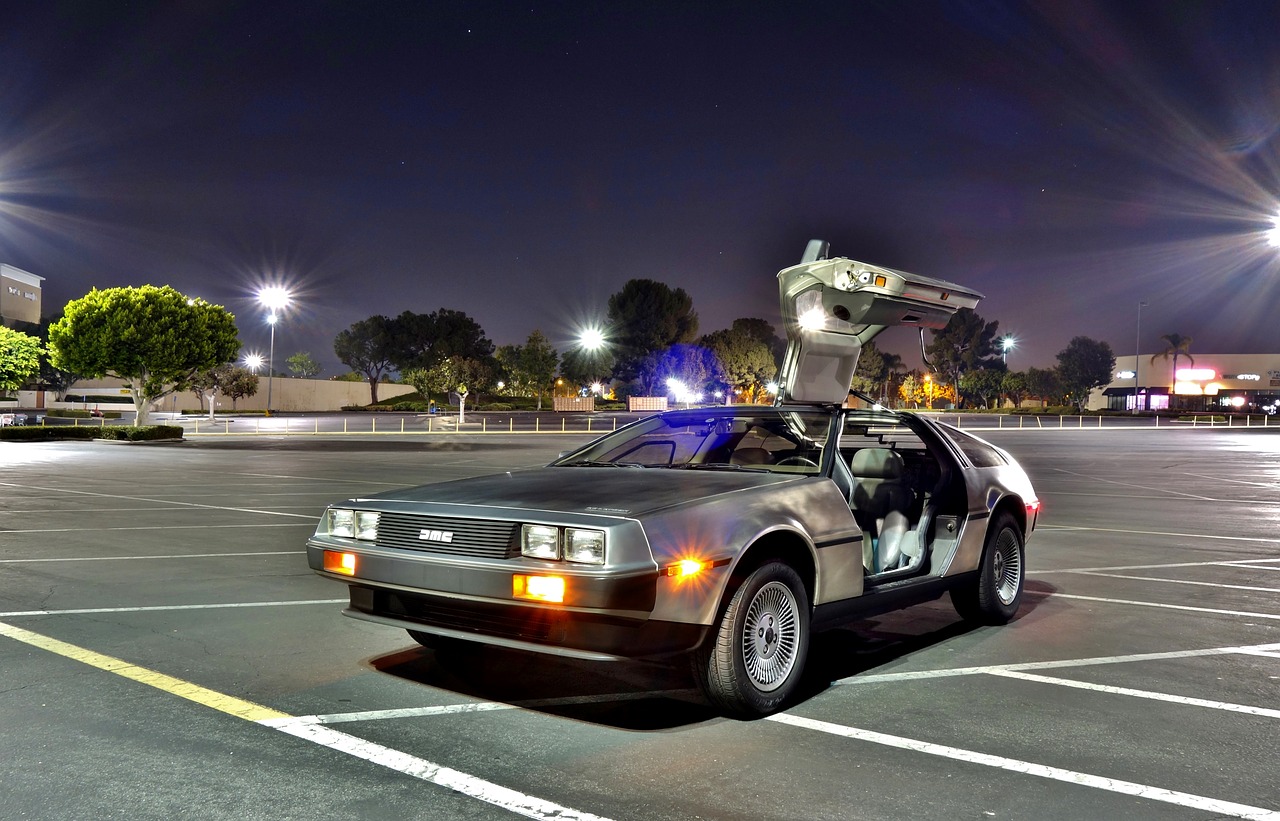 Back to the Future Product Placement

With the latest technology leaps leading us to a high-tech future, there is no better movie than Back to the Future trilogy. Electric cars, buses, bikes, and soon airplanes and helicopters, renewable energy, wind and solar power, and many other initiatives are to make our planet a better place to live. Back in 1985 when the first part of Back to the Future was released, we could hardly imagine that in 35 years we would have much more than it was shown in the movie. Semiconductors nowadays make it possible to produce various equipment, gadgets, electric cars, smart homes, and it is just a matter of time, when a real Dr. Emmett Brown builds the time travelling DeLorean or, maybe, Tesla.

It’s almost eighty eight miles per hour! Get in! We are heading back to the future!

Back to the Future

Seventeen-year-old Marty McFly (Michael J. Fox) is accidentally sent back in time from October 26, 1985 to November 5, 1955 in a time machine built from a DeLorean by eccentric scientist Emmett “Doc” Brown (Christopher Lloyd), when they are attacked and Doc is apparently killed by Libyan terrorists from whom he stole the plutonium that gives the flux capacitor the 1.21 gigawatts it needs to time-travel. Soon after his arrival in 1955, Marty’s mother, Lorraine (Lea Thompson), falls in love with him, rather than with his father George McFly (Crispin Glover), threatening to cause a paradox that would result in Marty ceasing to exist. Without plutonium to power the time machine, Marty must find the 1955 Doc Brown to help him reunite his parents and return to 1985.

The efforts of Biff Tannen (Thomas F. Wilson), George’s bully and supervisor, further complicate Marty’s situation until Marty successfully causes his parents to fall in love and simultaneously convinces George to finally stand up to Biff. Returning to the future via a lightning strike that powers the machine, Marty discovers a vastly improved situation for the McFly family, as a much more confident George has become an accomplished science fiction author, Marty’s two older siblings have better lives, he owns the car of his dreams, and an apparently-softened Biff is now an auto detailer, rather than George’s supervisor. Despite 1955 Doc’s insistence on not knowing details of the future, a note Marty leaves in his pocket on November 12, 1955 prevents him from being killed by the terrorists.

In the beginning of the movie we see Doc’s breakfast automation tech. Here we can spot Burger King leftovers. And what is more interesting, the design we see is the one BK got back to lately. Back to the future starts to mean more, right?! In a second we will see the coffee maker produced by General Electric and a Spectra 2000 TV by Sanyo.

During Marty’s auditions we see him playing his Ibanez electric guitar. The band has Yamaha drums as well. Later in the center of Hill Valley he spots his dream car right in front of Texaco gas station.

Back at home with his very sad looking family Marty drinks his Diet Pepsi. At the table we can also spot Sophie Mae peanut brittle, Heinz ketchup, Idaho Spuds, and Bud Light. Besides, we can see that Marty’s wearing Casio CA-50 watch.

And now it is time for Marty to begin his adventures. In his bedroom we see Panasonic alarm clock radio. When he arrives to the place of his trip to the past, Doc asks him to shoot the launch with JVC camcoder. When they run an experiment with Einstein, we see Doc to check time using more Japanese brands. Not these are Citizen and Seiko stopwatches. DeLorean is equipped with Goodyear tires, by the way.

In 1955 cafe we can see Almond Joy and Wrigley’s chewing gum product placement. And when Marty finds himself in his mother’s house, we can spot Miller beer.

Back in 1955 Marty has a few things from the future, which help him to make all things right. These things include his AIWA personal cassette music player and Converse shoes.

When Marty is finally back in 1985, he arrives right next to the Bank of America. And in the last scenes of the movie we are happy to see that Marty succeeded in his plan, and now his family lives much better. And Biff polishes his dad’s car with Turtle wax wearing Adidas suite.

Back to the Future Part II

The series continues as Doc Brown travels with Marty and Jennifer to the year 2015, where he has discovered Marty’s family is in ruins. Shortly after rectifying the situation, Marty buys a sports almanac containing the outcomes of 50 years (1950–2000) worth of sporting events to make easy money. However, Doc talks him out of it and throws the almanac in the trash bin, where the 2015 Biff Tannen finds it. A sleeping Jennifer (Elisabeth Shue) has been taken by police to her future home, needing Marty and Doc to retrieve her before returning to 1985.

While Marty and Doc are at the 2015 McFly home, 2015 Biff steals the DeLorean time machine and gives the book to his 1955 self just before he goes to the dance at the end of the first film. When Doc and Marty return to 1985, they find that Biff has used the sports almanac’s knowledge for financial gain, which allows him to turn Courthouse Square into a casino with 27 floors, take over Hill Valley, get away with the murder of Marty’s father, and later marry Marty’s mother.

Marty learns that Biff was given the book by 2015 Biff on November 12, 1955, so he and Doc go back to that date in order to steal the almanac from Biff before he can use it to destroy their lives. They accomplish this in a complex fashion, often crossing their own past selves’ paths. When the duo is about to travel back to 1985, a lightning bolt strikes the DeLorean and activates the time circuits, sending Doc back to 1885 and leaving Marty stranded once again in 1955.

When Marty, Jennifer and Doc arrive in 2015, we see a very nice pair of Nike shoes with self tightening laces.

While Doc spies on Marty’s son we see him calling from AT&T booth. After that Marty gets to know from USA Today newspaper why he came to the future.

Texaco in 2015 still sells gas, but now fully automated. And in the antique store we can see many familiar brands from our past and present: Perrier water, Apple computer, JVC TV and camcoder, Magnavox Weekender AM-62 transistor radio, Black & Decker DustBuster. In the cafe scene we can as well see the TVs produced by JVC along with numerous Pepsi product placement.

When together with Marty we come to his future home, more brands are waiting for us there. Here we learn about dehydrated Pizza Hut pizzas, Black & Decker hydrator to make this tiny pizza big enough for a whole McFly family, and JVC smart glasses.

When Marty flies back to 1985 he finds out that the past (present) was altered, and now he has bigger problems to solve. His mother is drinking more than ever, and now she’s living with Biff. In their apartment we can see many beverages like Beefeater gin, Sauza taquilla, and others.

Back to the Future Part III

After finding out that Doc Brown was trapped in 1885, Marty sets out to find the 1955 Doc to help him fix the DeLorean, which has been waiting for him in a mineshaft for seventy years, and restore it to working order. Learning that Doc gets shot in 1885 by Biff’s great-grandfather, Buford “Mad Dog” Tannen, Marty travels back in time to save Doc (who has become a blacksmith) and bring him back to the future.

Arriving in the middle of a melee between the United States Cavalry and American Indians, Marty is forced to flee to a cave, the uneven terrain tearing the DeLorean’s fuel line in the process, emptying the fuel tank and rendering the engine useless. Marty convinces Doc to come back with him and find a way to get back to his time before it is too late. After several dramatic action scenes involving using a speeding locomotive to push the DeLorean to 88 miles per hour (142 km/h), Marty returns to 1985 without Doc Brown.

When the DeLorean appears in 1985 on the same train track as planned, a modern train destroys the DeLorean, with Marty jumping out just in the nick of time. Marty reveals to Jennifer the time travel adventure, and they visit the scene of the wreckage of the DeLorean. He worries that Doc has been lost in the past forever, when suddenly Doc appears in a new time machine, modeled after a locomotive. When Marty asks if Doc is going to the future, Doc replies that he has “already been there.” Doc’s last words of wisdom are that nobody knows their future, so they “must make it a good one.” The locomotive flies across the sky and disappears, ending the trilogy.

The last part of Back to the Future trilogy has just a few product placements. No wonder, we are in 1885. And when Marty comes to the very beginning of Hill Valley history, we see Wells Fargo building there.

During the festival in the town, Marty comes across Frisbie’s Pies and shows us what later became Frisbee.

In one of the last scenes of the movie, when Marty tries to get back Doc to life after a shot of whisky, the bartender prepares a special mix using Tabasco sauce.

When Clara (Mary Steenburgen) is waiting for a train, we see that at the station there is a Western Union department. Probably the same one Doc used to send Marty the letter to the future, which he read in the beginning of the movie.

That is too bad that there are only three movies. However, maybe that is the answer why we love them. Come back for more in September. Next month we’re going to travel across the world together with the latest James Bond movies.

If you love product placement, I highly recommend you to visit Product Placement section of the website. You will find more movies analysed there.

Back to the Future Product Placement