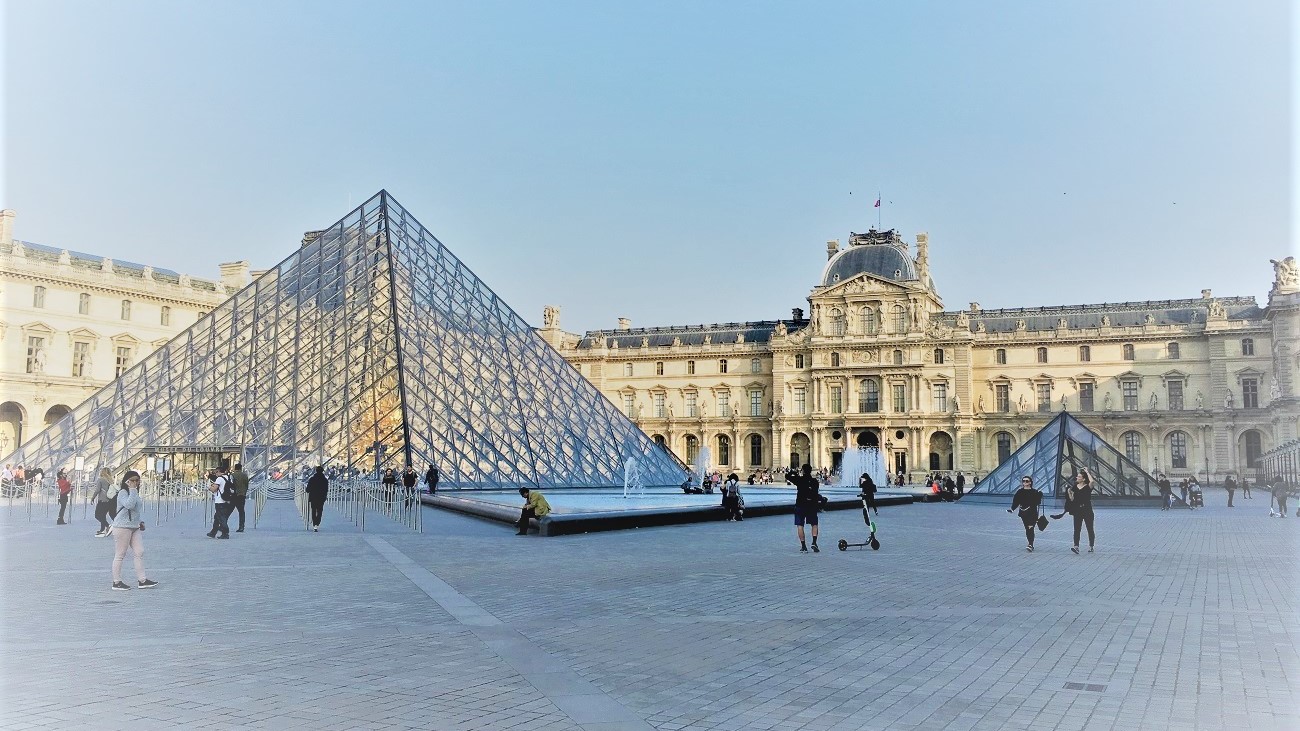 I love the adventure stories with twisted plots, mysteries, puzzles. That is why I love the stories created by Dan Brown and his major character Professor Robert Langdon who was very well played by Tom Hanks in the series of successful movies. Moreover, in my travel adventures I managed to visit most of the countries, places, museums, etc, and even CERN, which are described in the books and movies. And when I watch the movies I travel back in time together with Professor Langdon.

So, today I invite you to solve great mysteries of Leonardo, Illuminati, and Dante. It’s time to refresh your knowledge of history and arts. Welcome aboard!

Jacques Saunière, a Louvre curator, is pursued through the Grand Gallery by an albino Catholic monk named Silas, who demands the location of the Priory’s “keystone” to find and destroy the Holy Grail. Saunière gives him a false lead and is murdered. The police find his body posed like Da Vinci’s Vitruvian Man. Police captain Bezu Fache has his lieutenant, Jérôme Collet, summon American symbologist Robert Langdon, who is in Paris for a lecture on the interpretation of symbols, to examine Saunière’s body.

Langdon is shown the body and a secret message, readable only by blacklight. It contains an out-of-order Fibonacci sequence. Sophie Neveu, a police cryptographer and Saunière’s granddaughter, tells Langdon that Fache planted a tracker on him after finding the words, “P.S. Find Robert Langdon” at the end of Saunière’s secret message. Fache believes that Langdon murdered Saunière. Sophie throws away the tracker, distracting the police while they sneak around the Louvre, finding more clues in Leonardo da Vinci’s works. Langdon deduces that Saunière was the grand master of the Priory of Sion. And our adventure begins.

We meet Professor Robert Langdon for the first time during his lecture. He uses Sony laptop for his presentation.

In one of the next scenes of the movie we can clearly see the van with Bosch logo. Same is for the famous French water – Badoit. We can see it in a bucket full of ice.

When Robert Langdon and Sophie Neveu (Audrey Tautou) come to the bank to retrieve the cryptex, we can see how KUKA robot picks the right box that belonged to Jacques Saunière. When the bank employee helps the main characters to pass the police, we can get a glimpse of his Rolex watch.

At Sir Leigh Teabing’s (Ian McKellen) house our guests learn more about The Last Supper painting secrets. Their host is also a fan of Sony, so we may see various TV sets and displays in the house. While enjoying their evening tea, we can as well see Heinz there, of course.

When Robert Langdon and Sophie look for a tomb in London, they borrow a Sony Ericsson smartphone to search for more information.

In the final scene of the movie we see that Robert lives in Ritz hotel in Paris, and from there he starts his evening walk to follow the Arago medallions and come to the Louvre.

The Catholic Church mourns the sudden death of Pope Pius XVI, and prepares for the papal conclave to elect his successor in Vatican City. Father Patrick McKenna (Ewan McGregor), the camerlengo, takes temporary control of the Vatican during the sede vacante period.

Meanwhile, at CERN, scientists Father Silvano Bentivoglio and Dr. Vittoria Vetra (Ayelet Zurer) create three canisters of antimatter. As Vetra goes to evaluate the experiment, she discovers that Silvano has been murdered, and one of the canisters was stolen. Shortly thereafter, four of the preferiti, the favored candidates to be elected pope, are kidnapped by a man claiming to represent the Illuminati. He sends the Vatican a warning, claiming he will murder each of the cardinals from 8 p.m. to midnight, when the stolen antimatter will explode and destroy the city, hidden somewhere within.

Unlike two other movies, there are only few product placements in Angels & Demons. And they can be divided in two categories – Sony and TV channels.

That is why we see Sony computers and displays in the first scene in CERN.

And when the events of the movie accelerate, we can see various TV channels broadcasting from Vatican City. These are Canal+, CNN, and Reuters.

And this is it for Angels & Demons. More product placements are waiting in Inferno.

Some time after helping the Vatican dealing with an antimatter threat, Harvard University professor Robert Langdon awakens in a hospital room in Florence, Italy, with no memory of what has transpired over the last few days, but being plagued with hellish visions. Dr. Sienna Brooks (Felicity Jones), the doctor tending to him, reveals that he is suffering from amnesia as a result of a bullet wound to the head. An orderly says the police are there to question Langdon but the officer turns out to be Vayentha, an assassin, who shoots the orderly while coming up the hallway. Brooks helps Langdon to escape, and they flee to her apartment.

Among Langdon’s personal belongings, Langdon and Brooks find a Faraday pointer, a miniature image projector with a modified version of Sandro Botticelli’s Map of Hell, which itself is based on Dante’s Inferno. They soon realize this is the first clue in a trail left by Bertrand Zobrist, a dangerously unstable villain who believed that rigorous measures were necessary to reduce the Earth’s growing population, and who committed suicide three days earlier after being chased by armed government agents.

When Robert Langdon wakes up in Sienna’s house, we can find various brands across her apartment. First of all we see Sony TV remote controls. And when Professor asks for coffee, Sienna goes to the kitchen where we spot tea brands like Greenfield and Twinings.

While Sienna is looking for some clothes for Robert, he decides to use her Apple MacBook to check his Google mail.

When Robert and Sienna decide to call to the consulate, we see that Sienna uses Sony smartphone. When they realize that they can trust no one, they start their investigation. First, they search for the information about Zobrist. Google, Wikipedia, and YouTube are very helpful even in the movies.

Later in the movie we see more Sony product placements – a TV set in Command Risk Consortium, a smartphone and a tablet used by Elizabeth Sinskey.

When Robert Langdon and Sienna Brooks try to escape from their enemies with the help of Christoph Bouchard, they make everyone believe they are going to fly to Switzerland via Swiss, but instead they take an Italo speed train to Venice.

When finally the truth is revealed and memory is restored, Robert and Elizabeth go to Istanbul to stop Sienna from unleashing the virus. Elizabeth shares Zobrist’s message with Robert. They watch it together on a Dell laptop.

In the final scene when Professor returns Dante’s mask to the museum, we can see the museum employee wearing the tag with the Florentine Civic Museums branding.

Unfortunately, there is no news about the future movies with Tom Hanks. And no news about any new books. Looking forward to new adventures of Professor Langdon.

I highly recommend you to visit Product Placement section of the website. You will find more amazing movie series analysed there.